What does it take to be a successful belly dancer?

Passion
If you love your dancing and nothing can stop you from doing it, you have the first ingredient right there.

Break Old Habits
Develop these. Do something different today – something that you usually wouldn’t do. If you usually listen to Setrak in the car on the way to work, then listen to Mostafa Sax instead. Get to know some music in your collection that you’re not very familiar with.

Go The Extra Mile
If you think that practicing twice a week is enough, make sure you practice three times a week. Make that extra effort and it’ll pay off. During a show, give it all you’ve got! Make sure you have eye contact with people all through the show. Looking at the ground or the ceiling or at the wall (it sounds silly, but I’ve seen it done and, in my less grand moments, have done one or more of the above myself) even for a few seconds breaks your focus. Your focus should be on your audience and when I say eye contact, I mean eye to eye, not eye to forehead or eye to nose. That’s the oldest trick in the book–looking just above someone’s eyes or just below. And it does give the illusion of eye contact, and your audience won’t necessarily pick it up, but it will make a difference to their reaction. Look the audience member straight in the eye and for those few seconds make the show just for them. For those of you who don’t believe me, experiment. Try for yourself and you’ll see the difference. 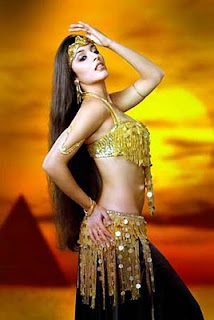 Attitude
Everyone has bad days – the difference between those who grow from the challenges and those who give up is attitude. Decide to be positive. Positivity must become part of your mindset. Control your mind: it’s the most powerful tool you have after all. There will always be the odd nightmare gig where the audience is full of losers, you don’t remember your choreography as well as you wanted to, they’ve changed the setting of the tables and there isn’t enough room for you to comfortably use your veil. I could go on forever!! There are little things that can happen in any given show. Like using a stick in a restaurant and sending a tray flying. (I had no idea the bloody thing was there… and lucky it was empty!… before I realised it was a tray I had whacked, I figured I must have knocked a vital part of the building and the whole restaurant would come crashing down on me any minute. A little unlikely, but in hindsight I believe that’s what I hoped had happened: to end the blasted show – it wasn’t the only little slip-up of the night). So what did I do? I laughed. As far as I was concerned, it wasn’t funny at all – it was a disaster – but I have a rule: even if you don’t feel like a trooper, you’ve got to act like one! It was the first time I’d ever danced at this restaurant, the show had to be good. Stranger than trays flying in the air was the fact that the restaurant called me a couple of days later for another (very successful) show. Phew!

Speak To Other Successful People
If someone is successful without hang-ups they will most definitely be happy to impart their knowledge to you. Not just in belly dance, but in any field. Study what they do, read books or articles that they’ve written–they’re at the stage you want to be. Find out what got them there! This doesn’t mean copy them, it merely means: pick their brains and then make your own plan of success.

Goals
Make a plan! If you fail to plan, you plan to fail as far as I’m concerned. Two percent of the people in each field have most of the money and success. Studies of these people over the years have come to certain similar conclusions and one of those is that they have a vision of what they want to happen in the future and they write down their plan. Write your talents down – what makes you unique, what are you particularly good at? Then write down your liabilities–your negative traits, the obstacles you’re likely to encounter on the road to success. Next, write how you’ll overcome these obstacles–everyone will have different ways of tackling complications. Now, having said this, not everyone wants to become a famous belly dancer and that’s okay. Everyone’s perception of success is different–what you want is what’s important.

Applaud Others’ Success
Don’t be stingy with your praise. That only shows your own insecurity. When you’re watching someone else’s show, don’t be bitter and twisted about their success. Have a smile on your face – clap, encourage them. You don’t like having someone sitting in your audience with a sour face, so don’t do it to someone else. Even if your personal opinion is that the show is a piece of rubbish, there’s no need to show it. Others in the audience might be having a great time, and there’s no need to ruin it for them–everyone is entitled to her own opinion.