From the Los Angeles Times
Kavita Daswani | Special to The Times 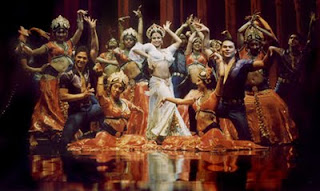 TO anyone who has ever seen a Bollywood film, the moves are instantly recognizable: the nifty shoulder swivel, the delicate flourish of a hand, the undulating hips and swaying torso. Now those very moves — a staple of popular Hindi films — are also the path to fitness.

Already popular in the United Kingdom, on the East Coast and in Northern California, Bollywood workouts are fast gaining traction in Southern California, with classes in West Hollywood, Marina del Rey, and Glendale, as well as cities with sizable south Asian communities such as Irvine and Artesia.

“In this society, women are not really comfortable bringing out their inner drama queen,” said Hemalayaa Behl, an Ojai-based yoga and fitness instructor who recently released “The Bollywood Dance Workout” on DVD. “But in Bollywood, it’s encouraged. With these workouts, we’re saying: ‘Let her play, let her shimmy, let her loose.’ “

Bollywood dance is inherently sensual — almost primal. Achinta McDaniel, who teaches Bollywood Bhangra Beats at Swerve Studio in West Hollywood and Bollywood Body Heat at Your Neighborhood Studio in Culver City, said she even encourages her students to adopt the sultry facial expressions that go with this kind of dance.

The expressions help make a stronger connection between the exuberance of the music and the sexy, swirling movements, she says.

Class members managed to smile through even the sweatiest high-impact segment — hopping repeatedly on one leg while twirling the opposite arm high above the head.

Unlike exercise disciplines that stress intensity above all, having a good time is at the core of Bollywood workouts.

They also teach moves based on the vibrant dance steps featured in almost every Bollywood film, complete with songs from movie soundtracks.

Most also include moves inspired by the bhangra, a hugely popular folk dance that originates from India’s Punjab region, that involves robust foot-stomping while jerking the shoulders and arms upward.

Also, Naach (the Hindi word for “dance”), a professional dance company that teaches structured Indian dance classes as well as Bollywood fitness classes, began Naachercise classes in Irvine in March and is looking at other potential locations in Greater Los Angeles.

“The cardio section uses Bollywood routines, but not in the form of structured, choreographed classes,” co-founder Aditya Patel said. “It’s fitness-based rather than dance-based, using lyrical movements but keeping fitness to a certain level.”

Oriental Fire will be teaching a Bollywood Dance Workshop at Syncopate this year contact Ava van Aarde for details!