There’s been rumours about this for ages. That would definitely be a movie I’d want to see. Since working on our show which will feature all the best Bollywood Hits and good doses of Belly Dance I love seeing the two combined. 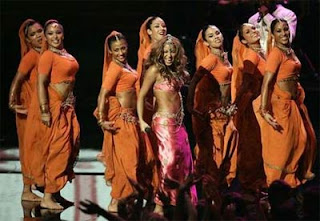 (From the Huffington Post)
After all the hip shaking and belly dancing, it only makes sense that Shakira is now considering Bollywood.
According to reports by The Daily Record, the Colombian pop star could make her acting debut in an upcoming Bollywood film. The movie, titled “Desire,” will be directed by Bangladeshi director Enamul Karim Nirjhar, who received a National Nomination from Bangladesh for the 81st Academy Awards in the category of best foreign film for his movie, “Aha!” A large part of the movie is set to be filmed in Scotland.

Shakira is still in negotiations with movie executives to sing in the movie’s soundtrack as well as to act in the role of “Desire,” according to The Daily Record.
Pending the negotiations, Shakira is expected to record the soundtrack with the London Philharmonic Orchestra.

Shakira is no stranger to Bollywood.
In the 2006 MTV Video Awards, Shakira added some Bollywood moves– and her own version of traditional Indian attire — to a live performance of her hit song, “Hips Don’t Lie.” At the time, she expressed interest in doing a Bollywood-style dance video with film director Farah Khan, who worked with her on the performance, according to BBC News.

Other Latin Americans have previously worked in Bollywood films. Brazilian super model Giselle Monteiro, for instance, played the leading role of Harleen Kaur in the 2009 Bollywood film, “Love Aaj Kal.” Mexican actress Barbara Mori had a lead role in the movie “Kites” alongside Bollywood actor Hrithik Roshan. The film was a love story between a Mexican beauty and an Indian man.

Now it appears the Latin American star who popularized belly dancing is set to make her mark in Bollywood.