I got to attend a community Belly Dance organised by Natasha at I.D.S show which was a fun showcase of 5 dance studios and also helped to raise awareness for the projects of  Family Care SA. There were some adorable performances by kids which I really liked, Isis Wings was the most featured prop and one I say can be absolutely fascinating when used well. Some dancers tend to rely on them being an amazing feature and fail to really have it compliment the dance and end up just spinning a lot, others just make it almost an extension of themselves and it’s adds some beautiful movement and shape especially on a stage with good lighting, then it’s one of my favorites! 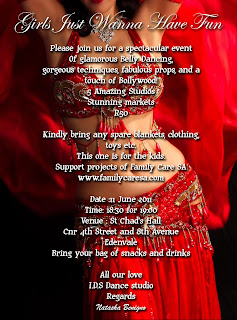 It was fun to meet 2 teachers for the first time in person that I’ve chatted with on Facebook on a Belly Dance Teachers in South Africa group. It was nice to see them perform and see their styles and enjoy the showcase of their students.

Oriental Fire performed our Bollywood thing and the best thing was having a nice big stage so we actually got to perform with our full group of 6 dancers which was great fun to choreograph and experiment with. Most of our shows have been with 3-4 dancers but the more you have the more you can do. I’ll have to post pics when I get some. We also were recognized from our TV show on Saffron and met a presenter from another show who wants to have us on soon! We’ll keep you posted.

It was so nice some of my friends could come support us and see our show (finally) and I’ll be looking forward to working with them more soon. I loved how some of the audience told us how much they enjoyed the Bollywood which they had never seen before so our goal of bringing it to a wider audience is working. Yay!

I had interesting thoughts on some of the song choices done by some of the belly dancers. I’m all for mixing traditional with modern for belly dancing and I also am of the group that belly dancing needs to be made interesting for an audience with no knowledge of traditional belly dance sometimes (which you should adapt if you are dancing for an all Egyptian or Turkish audience). In saying that I still think there’s a limit, it should be a  PART of your show, not all of it so that you can showcase the more authentic, cultural side as well. I also think some songs are well suited because they have an Arabic flair, or an interesting rhythm that goes well with belly dance moves, other songs detract from the beauty of belly dance simply because it doesn’t suit it. I know it’s a matter of taste but I thought I’d say my two sense. I appreciate your views.